The premium for IMO 2020 bunkers evaporated in March with the average price paid for bunkers in major ports 20% lower last month compared to March 2019, according to Ship & Bunker Data.

The introduction of a global 0.50% sulfur cap on January 1, 2020 means most vessels are now burning VLSFO fuel, rather than the IFO380 HSFO they were lifting last year. This means buyers, operators, and those with BAF agreements should compare VLSFO prices this year with IFO380 prices in 2019 to gauge the real-world year over year change in bunker costs.

Looking at Ship & Bunker’s Global Top 20 Ports index that tracks bunker prices across 20 of the world’s top bunkering markets, the monthly average VLSFO price for March was $351.50/mt. This compares with the average IFO380 price for March 2019 of $425/mt.

Looking at weekly averages during the first quarter, for the first nine weeks of 2020 VLSFO has been higher than IFO380 during the equivalent period in 2019, and lower thereafter.

But with crude prices jumping as much as 35% Thursday after US President Donald Trump hinted at huge production cuts, it remains to be seen how long the current low price environment will last. 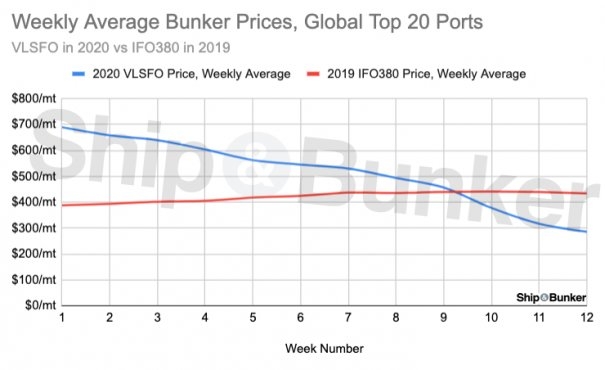